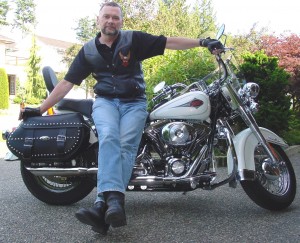 The ocean of life, god bless it, ebbs and flows around us, sometimes drawing us in, other times, passing by. Happiness comes in waves, followed by the occasional rip tide that leaves the swimmer spent and empty, tired of the seemingly endless wear and tear from the pounding surf.

On such a sea I found myself in 1989. We had just moved from the Arctic to Victoria, based on a promise made to my wife seventeen years earlier. During the Arctic years, we did things most southern folk cannot even imagine. We grew to love that vast and timeless land with its unspoiled ways. The company we founded blossomed in this frontier, and our fortunes grew along with it. Life was good, and we dined with Queens, Princes and Prime Ministers along the way.

After 15 years in Canada’s Arctic, my wife was becoming quite weary. She was feeling the strain of years North of the 60th parallel, the endless winter nights, the raising of our two daughters. For my part, I was always travelling across the Arctic, then to Russia on another project, and so on. The gulf was growing between us, and we both knew it, although we seldom spoke about the real issues. In an effort to save our relationship, I secretly made plans to sell out of the company and flew into Victoria to look for waterfront property and early retirement. When I finally signed the deal, the pen felt like a leaden sea anchor.

In 1989 we moved into our new home on the beach. Within the year,(1990), my wife and I had separated. It was actually over, after 18 years together. I was devastated, sold everything, except for a motorcycle. For several years I wandered up and down the coast on that machine, letting it take me nowhere in particular. There was no desire to work or meet people in any social context. It was self exile in a bland universe, except for the wind, rain and endless highway.

One sunny summer afternoon, it all changed. The moment is as clear now as it was then. Left turning lane at the airport turnoff. Red Light. Black Honda in front, the white motorcycle directly behind, just off the left fender of the Honda’s orange blinking turn signal. Woman in the Honda glances back at the bike. Man on bike looks directly into the Honda’s side mirror. Strikingly beautiful woman, he thinks. She continues eye contact. Light goes green. They all turn left. She turns right. He turns right, and for a moment thinks that he should approach her. Sober second thought, he backs off. Too many stalker stories, she would freak out. Anyway, she’s probably in a relationship. Motorcycle peels off on a side street, common sense taking over.

Within 5 minutes, he’s home, and the blandness returns, just as it has for years. There is a message on the answering machine. A friend, always concerned about him, tells of a woman who might be interested in having him do some programming work. In the past, he has declined such offers, seeing them as badly disguised social charity efforts. He notices that it is a local number, nearby. Still some daylight left, or whatever reason, he dials her number. She answers. He mumbles something about programming. She says she has some work that might be interesting. He agrees to meet for a few minutes.

The directions take him across the peninsula to the ocean a few miles away. He pulls up in front of her place. She walks up from the garden wearing her gardener’s hat, holding a freshly cut bouquet for the table. There is a familiarity about her. She looks at him with the same quizzical expression. “Were you on the highway about an hour ago on your motorcycle?”. He feels the question deep in the pit of his stomach. “Were you turning left at the airport in your Honda about an hour ago?”. “I wanted you so much to pull along side and talk to me”,”she whispered. Dumbfounded, he realized that there really are guardian angels setting the stage for each of us in due course. It’s just that some of us are pretty thick about picking up the ball.

It’s been over twenty years now, we are two peas in a pod, and it just keeps getting better.