The days are long and boring, those dog days of summer. He dreams of the ocean swim to come, that daily ritual that takes us through the park, past the noisy grey squirrel on the old cedar stump. For his part, Lord Duggan of Scottswood patiently guards our digs until the sound of tires roll up the driveway.

The shadows begin to stretch from the trunk of the arbutus all the way across the back lawn. We shake the dust of the day from our collective shoulders. We’re off for his swim, and we’re both off duty. It’s payback time for Duggan.

Duggan was never my idea. During the spring of 1996 my daughter came to visit us.  “You need a dog, dad”. “Not likely”, said I. One thing about my daughter is her consistency. She never did listen to me. So it was that the two women in my life conspired to add an animal to the household as they headed off on a tour of the SPCA shelters. “We’ll just look – gives us something to do”.  I was heartened when they actually returned empty handed, but the summer had just begun.

May wore into June, and the girls still hadn’t totally dropped the ‘save a dog’ theme. On the third Friday in June, as I pulled into the yard, there they were with a dog, best described as a ‘Canadian Random’. There he was, tail between his legs, cowering under the pink dahlia by the entrance, unwilling to go into the house at any cost. A sorry excuse for a male dog, if ever there was one. “He is a street stray, and he’s been beaten about, so he’s afraid of everything” explained the girls. Sarah, my daughter,  saw the look of disapproval in my eyes. “I’ll train him, dad – he’ll be a great dog”. I had my doubts. 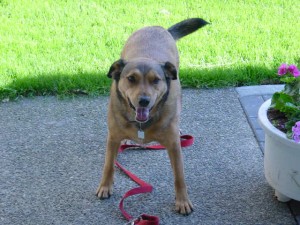 Sarah returned to University in August. They had named the dog Duggan. By the time she left, he was actually quite well trained and had become quite attached to Aleita and I. The dog turned out to be incredibly intelligent, had great humour  and was a joy to be around. I actually lost five pounds, guaranteed by those daily walks through the park to the ocean swim.

Duggan’s life was certainly be different than it was as a street urchin. Nevertheless, it was obvious that he held no grudges to anyone in the universe and didn’t see himself as a victim having missed part of his life in squalor. The priceless lessons he has taught us are from the heart, equal to the greatest teachings of the ages. Be here, now. See things as they actually are. Focus your entire energy in this moment. Stop to smell the flowers. Life is really not that complicated. Humans only make it that way, being absorbed by a constant flow of judgmental thought every second of their lives, diverting their energy into the past and future, away from the pure joy of the daily walk.

Duggan turned 15 in 2009. For the last few months the walks kept getting shorter, but with the same dogged determination he always had. His will never faltered, nor did his humor. It was clear that he must have been in pain, but he never let it get in the way of just being Duggan. That last Sunday, we teamed up to get him on the bed for the last time, so he could look out into the spring garden on his domain.

Duggan, you have earned your wings with your teachings. We, left behind with our feet of clay, miss you so very much.